Posted by christiaansijbranda on Aug 27, 2015 in Blog | No Comments

From Santiago it’s only 1.5 hour away to the beach city of Valparaiso and about an hour to the Andes for Skiing. Our couchsurfing host Andres invited us to go skiing with him after the weekend after our trip through the Patagonia. He also invited us back into his home after we returned from the Patagonia.

Our last day in the Patagonia was in Punta Arenas and we decided to stay in the same Bed and breakfast hostel for our last night. It was a very nice place for the same amount of money we paid in San Pedro de Atacama. The first night in Patagonia we could not take a bus to Puerto Natales so we stayed one night here and left really early to not waiste time (we only had a week). So this time we could enjoy the hostel (the super comfy beds and great breakfast) until the end. Not to mention that we had time to explore the city of Punta Arenas as we would fly back to Santiago at 5 PM.

After a 4 hour flight with a fuel stop in Puerto Montt we arrived back in Santiago. Our host offered to pick us up from the airport as he had 2 Australian guests that were flying to Europe. A perfect timing as he could drop them off and pick us up.

The following morning Andres left the house early as he had plans to meet with friends and stay a night at a beach town. We could stay in his place and he suggested to visit Valparaíso for a day so we could save money for not paying for a hostel.

Valparaíso is a beach town close from Santiago, only 1.5 hour away by bus so it’s perfect for a day. We didn’t include Valparaíso in our travels and Andres

told us it’s a very cool city famous for it’s street art. The thing was, we only planned our trip until the Patagonia because we bought a flight at the start of our trip so we had a fixed date to leave and return from the Patagonia. After returning we didn’t plan anything, except that we needed to be in Rio de Janeiro before the 1st of September.
Because we were going to ski on Monday we decided it was a good option to visit Valaparaíso on sunday as we were a bit lazy to wake up early on saterday because we went to bed at around 2 AM after returning from the airport on friday night.

We arrived around 11 AM in Valaparaíso to find a empty city with cloudy weather, at least it wasn’t raining! After walking from the bus terminal we arrived to the main interest point of the city, the street art neighborhood. A pretty cool but small part of town where some really cool graffiti works are painted on the walls of houses. You can check some works in the photos below. The rest of the city still remained quite dead as it was a sunday (in the winter) and not a very sunny day so going for a swim isn’t recommended. Side note: we walked around town with our sweaters and jackets to give you an idea about the temperature. After walking around town we found a

Starbucks (which was open) so we could not resist in getting a hot coffee and some wifi. Our coffee experience in South America has been horrible, the coffee here mostly consists of a tea bag and hot water, expect for herb there is coffee in the bag, I know, don’t ask how it’s possible, I haven’t figured that out yet. So the coffee from starbucks is pretty decent around here. We also found an interesting restaurant that only sells local food of Chile called Chorillana with a local drink called Terremoto (which means earthquake) so we had to check it out. Also the restaurant was a sight on its on as people from all over the world left their ID picture on the walls and it felt like all of them were staring at you while eating. Timon could not resist and placed his ID picture on the wall, unfortunately I didn’t had any pictures with me. In the end the food turned out to be okay, nothing special and for the drink, that was just horrible and quite strong with alcohol. It was a very sweet drink with a lot of weird flavors combined, we both didn’t like it.

It already started to get dark so we both had seen enough of the city and called it a day. Time to walk back towards the bus terminal and get back to Santiago for a good night sleep as we wake up early tomorrow for a day of skiing in the Andes. 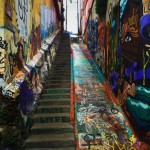 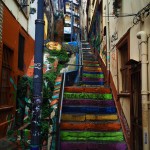 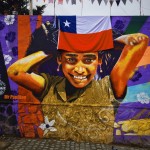 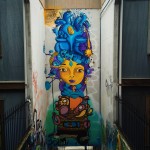 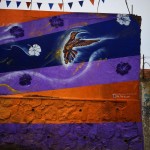 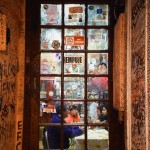 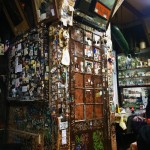 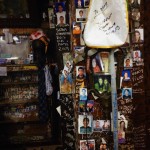 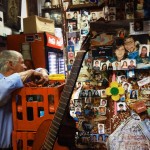 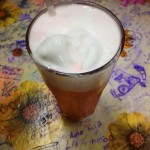 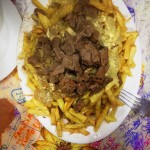